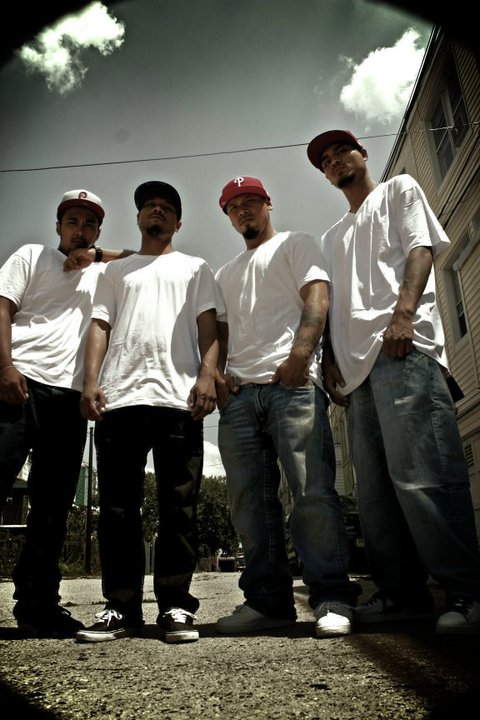 I had the pleasure to interview the Cambodian rap group, AZI Fellas. These four young men “came together to explore, improvise, and find complex musical styles as a means of expressing mixed and layered cultural identity, belief, stories and rhythm.” Not only are they musicians, they are also social activists fighting for their community and working to empower youth. And if I do say so myself, they are all comedians!

“We are a group of young Cambodian-American men, Touch, RazorSharp, Kornswagger, and Joe Hanzsum, from Philadelphia. We came together to explore, improvise, and find complex musical style as a means of expressing mixed and layered cultural identity, belief, stories and rhythm. Inspired by the work of Sinn Sisamouth and other classic Cambodian Rock’n’Roll artists, AZI has long found a unique voice and musical illustration of Cambodian-American Hip Hop. Our study and mastery of many musical instruments, traditional and modern, and our creativity in word and rhyme, gives us a distinctive sound that has captured musical communities around the nation. We also modestly invests our energy in causes that empower young people, including working with Tiny-Toones Cambodia, which educates at-risk youth in Phnom Penh.” – AZI Fellas

Are you all 100% Cambodian or of mixed heritage?

Where were you guys born?

How did you guys get your start in music?

AZI: We started playing Cambodian music in a Khmer band in our early teens but moved onto doing hip-hop music simply because it was more relatable to us while growing up in Philly.

What is the history behind AZI and the meaning behind the name AZI?

AZI: Korn and Touch are brothers and we all knew each other from the neighborhood. At the time around 2000, Joe and Razor were working on their solo projects produced by the brothers. That’s when we decided to form a group. Although the name AZI is pronounced as an acronym, it actually doesn’t stand for anything. It’s from the term “azi” (pronounced ah-zee) which is a Khmer term we use to refer to Asians. NWA was already taken, so we ran with AZI.

AZI: There is no one way to describe our sound. The ideal goal behind our sound is to capture emotions. Some songs are funny, some are sad. Others are motivational, some inspirational, some are even politically charged. We don’t limit ourselves to a type of music, we try to be well-rounded. Our influences are inspired mainly from 90′s hip-hop but we listen to all types of genres from Cambodian music to blues to classic rock to contemporary jazz. We are even influenced by music from different countries speaking different languages. 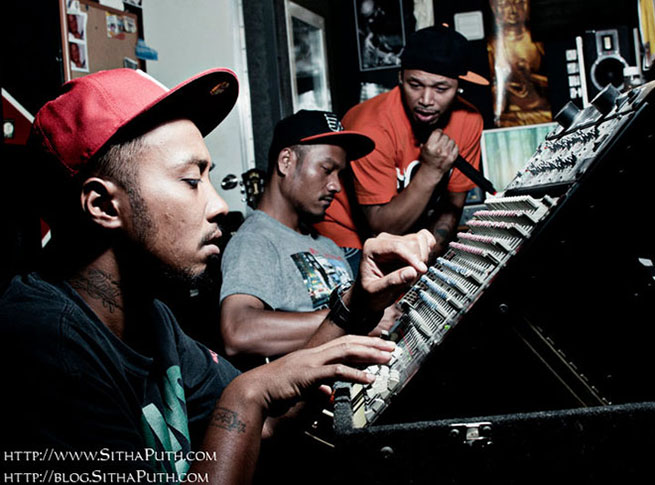 AZI in their basement studio – another practice session

There are many Cambodian immigrants/refugees who were able to adapt and assimilate to the American culture and life a lot easier than most. However, I feel your interview with the Philadelphia Weekly really tells the story of the challenges most Cambodian refugees faced upon settling in the United States. It’s not just the story of our people but of other groups of refugees as well. That said, I feel your music is not just targeted towards Cambodians. So what is the overall message you want people to take from your music?

AZI: We make music base on how we feel. If people decide to listen, that is their choice to do so no matter what race they are. Our subject matters and issues are easily relatable to all ethnicity and we recognize that as the beauty of hip-hop. It has the power to bring all types of people together.

Cambodian communities throughout the States have experienced the deportation of loved ones since 9/11. For those who may not know, can you explain what is happening in your community?

AZI: Since the Cambodian government began accepting Cambodian American deportees, 288 Cambodian Americans have been deported. Immigration and Customs Enforcement (ICE) and the Department of Homeland Security (DHS) expect to remove 400,000 immigrants this fiscal year – a 25% increase in deportations from just three years ago. The Obama Administration has shifted focus to deportation of “criminal aliens”, which includes any of us who came here as refugees over two decades ago, were granted legal permanent residency, and are now being deported for a crime committed years ago and where time has already been served.

“I entered the United States as an infant, made my mistakes as a juvenile and was punished for those mistakes as a young adult. And as I now embrace life as a reformed, tax-paying civilian, the actions of my past still haunts with what my fate might be. I can only implore mercy from a system in which I trust forgiveness and second chances still exist.” – Chally Dang, Letter from York County Prison, December 4, 2010.

Have you reached out to other Cambodian communities to see what they are doing to fight deportation?

AZI: Family, friends and supporters are getting their stories out to the media and starting online petitions to release certain individuals who have been recently denied. They are calling and writing to their elected officials and representatives, and organizing rallies and meetings to get more people involved. We want to say thank you to The Cambodian Association of Greater Philadelphia (CAGP), Media Mobilizing Project (MMP), Students Against Unjust Deportation, Mia-Lia and One Love Movement and everyone else for all the support in fighting for what we believe in. This is only the beginning. We are aware this will be a long, struggling battle so we must all come together. The stronger we are in numbers the louder our voices!

There are many other organizations across the country that have been really active in the struggle as well. Some of them are: Southeast Asian Resources Center (SEARAC) in DC, Deported Diaspora in Boston and LA, Khmer in Action (KIA) in Seattle, all which are helpful in organizing legislative visits to Capitol Hill and circulating petitions to ICE and DHS.

“Injustice” is a song AZI wrote in reaction to the possible deportation of two very close friends of theirs, Mout Iv and Chally Dang.

What can others do to help this cause?

AZI: Keep spreading the word! Tell your friends and family and reach out to other communities facing similar problems. Get your local politicians to understand the struggle and support your efforts. Build relationships with the press and get your stories out to the public.

For more information on how to organize locally around deportation, visit:
http://www.familiesforfreedom.org/httpdocs/deportation101.html

Know Your Rights with Police and Immigration Officials:
http://www.aclu.org/drug-law-reform-immigrants-rights-racial-justice/know-your-rights-what-do-if-you

If a loved one has been detained, the first step is to find them:
https://locator.ice.gov/odls/homePage.do

Contact all of your elected officials and let them know what’s on your mind, your concerns, your stories and the change you need to see in your community:
http://www.congress.org/congressorg/dbg/dbq/officials/

Have any of you been back to srok Khmer?

AZI: None of us have been back to the motherland but we all plan to visit one day. We have had the privilege of having a piece of Cambodia come to us. In 2009, the organization Tiny Toones from Cambodia along with a Khmer emcee by the name of Kdep, launched a five city tour in the U.S. Philadelphia was one of them. They visited us here at the studio, where we recorded a few tracks with Kdep, shared some stories and met some of the kids from the center. The kids showed us their undeniable passion for break dancing. It was a little intimidating to hear kids younger than us speaking the Khmer language so fluently as we struggles to keep up with our broken Khmer! Nevertheless, the whole experience was very moving to see the kids keeping the art of hip-hop alive in Cambodia where 30 years ago they wouldn’t have been able to do so.

Where would you like to see AZI in 5 years?

AZI: As of now, we are working hard on building our own label All Corners Covered (A.C.C.). Here at the camp, we have an incredible amount of talent we work closely with each day. All are indie artists: D.N.O.C, Kalek, Willie Green, Vern Geez, Seldym Seen, Rans Dolo, DeepCity. We want to open up more avenues, create outlets for them where we all can grow and continue to creatively make music independently.

What are you favorite Khmer dish?

What advice would you give to other Cambodian musicians who are trying to make it?

AZI: You don’t necessarily have to be signed to a major label to be successful. Without a solid core audience that genuinely supports the music you make, it’ll be harder to achieve success as a full-time career. The music industry in America is not designed for Asian artists to be successful, so you have to find ways to stand out. Dedicate yourself to honing your craft and finding a lane you’re comfortable with. Be true to yourself, the music industry is typically a shady business. Don’t shy away if people are not interested or reject you. Success doesn’t happen overnight. If all else fails, just tell all your Black and Spanish friends you’re Filipino… 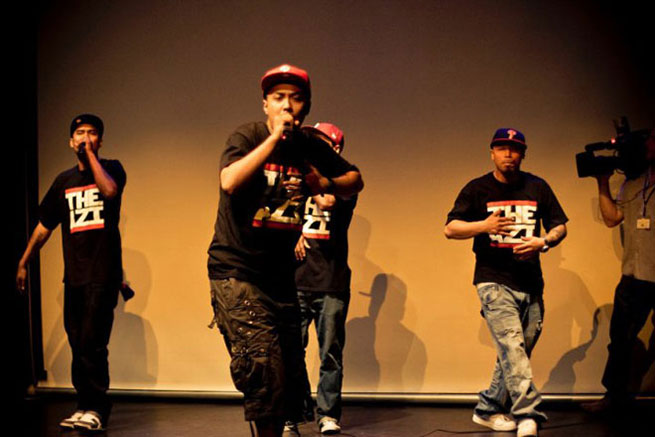 What inspires you collectively and individually?

AZI: We all can agree that we inspire each other. We’re like a family that has been working hard at this for a long time to reach success on OUR OWN merits.

For more about AZI Fellas: 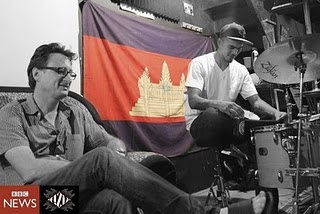 On that note, I’m going to leave y’all with a little taste of what the Fellas are bangin’ in yo ears!

Posted on February 5, 2011 by Cambodian Alliance for the Arts in Music, Poetry and Dance and tagged deportation, rapper. Bookmark the permalink.