Daron Ker – Filmmaker and Director of Rice Field of Dreams 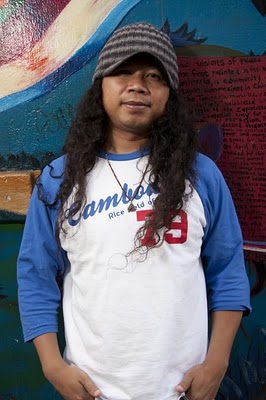 Finding solace while watching Kung Fu movies in the refugee camp, this sparked Daron’s imagination to become a filmmaker. After witnessing numerous explicit visuals from his experience in the camp, Daron landed in Southern California to make his dream come true. Daron accomplished that dream by receiving a BFA in Motion Picture and Television in 2002. Daron has written, produced and directed the documentary “Rice Field of Dreams”. A story about Cambodia’s first National Baseball team. The first screening will be held in Long Beach, CA this December following National and International screenings.

“My name is Daron Ker. I was born in Phnom Penh, Cambodia. It was 1974 was when the nightmare began. My family was stuck in Battambong concentration camp from (1975-1979). In late 79′, during the fall of the Pol Pot is when my family was able to escape the horror and landed in a Thailand refugee camp. My only escape was watching films which were projected onto a white sheet by an aid worker. That is where I discovered the magic of film. I watched many Kung Fu films there, but the one film that really stuck with me was a film titled “Spartacus” by Stanley Kubrick. From there on I told myself that if got out of here alive, this is what I wanted to do. In 1981, we arrived in America (Southern California), but I never forgot the indelible images and have since then devoted myself to the pursuit of understanding working in this “magic” medium.” – Daron

Daron: I am not sure if I’m 100% Cambodian. I was told from my dad that my grandpa is full Chinese.

Daron: I landed in the states in 1981 in Southern California. This is when my journey begins…

Daron: Good films inspires me, but my journey that got me here is what keeps me going.

When did you know that you wanted to be a filmmaker?

Daron: I decided that I wanted to be a filmmaker ever since when I a little boy when it was introduced to me at the refugee camp in Thailand.

What do you like to do better? Producing or Directing?

Daron: I like both aspects, but I think my passion is Directing.

Name some of your favorite movies.

What was your first accomplishment and break into the film industry?

Daron: I directed many short films which were shot on Super 16mm while I was in college, but the one film that got me recognition was a dark comedy short that I directed with a full crew titled “Candy Corpse”. We did well in film festivals. The film that is getting lots of press now is my recent two features titled “I Ride” and “Rice Field of Dreams”. Both are different films, but “Rice Field of Dreams” is a film that is closest to my heart because it focuses on Cambodia and baseball. I am very proud to make “RFOD” and honored to be Cambodian.

What is the synopsis of your documentary “Rice Of Field Dreams”?

Daron: Synopsis: Joe Cook is a complicated fellow. Born Joeurt Puk in Cambodia, he and his family fled the murderous Khmer Rouge regime to the United States in 1975. They were among the lucky ones: between 1975 and 1979 the Khmer Rouge exterminated two million Cambodian citizens. Among the dead were Joe’s father and two younger sisters. Joe was 12 years old.

Joe ultimately became a respected chef for the Mikata Japanese Steakhouse in Dothan, Alabama (hence his customer-bestowed name: Joe Cook). He married and had two children. He was American and he was happy. Still, something in his life was missing – something to do with his stolen Cambodian heritage.

In May 2002 Joe learned that his sister – long thought a victim of the Khmer Rouge – was alive. He immediately traveled to the village of Baribo, 68 miles west of Phnom Penh, to reunite with her. It was during this reunion that Joe conceived the project that has preoccupied him to this day: he decided that Cambodia – this country bombed by the United States during the Vietnam War and ravaged by the Khmer Rouge– needed an addition to its cultural options. Cambodia needed that most American of institutions: baseball.

RICE FIELD OF DREAMS follows the journey of Cambodia’s First National Baseball Team as they prepare for and participate in the 24th “Sea Games” – an Olympics-like sports competition between South East Asian nations to be held in Bangkok. For the 22 young players Joe assembled and trained over the previous five years it is their first venture outside of their farming villages.

Along the way we experience the texture of daily life in these villages; meet the American coaches who have donated their time; and travel with the team to the culture shock inducing city of Bangkok for the competition.

We hear the player’s stories; watch their preparation for the Games; and learn about America’s interest in Cambodian baseball when Jim Small, Vice President of Major League Baseball, visits.

But most of all, we experience the drama of the team’s five games. No one expects these rookies to best the competition their first time out, but nonetheless emotions run high. How well will they do? Will they even get a hit? How many hits? How many runs? They are representing their country and they want to succeed.

The film crew fully expected that they would be filming a strickly feel-good story: Cambodian refugee escapes the Khmer Rouge; comes to America; then brings hope and baseball back to his homeland.

But what they discover is that life — and Joe Cook — have a way of complicating strictly feel-good stories.

This film has it all: drama, humor, an exotic location and an athletic competition. A “West meets East” dynamic and an engaging cast of characters. But most of all RICE FIELD OF DREAMS has heart. As the final shots of the film assert, baseball is a gift to upcoming Cambodian generations and Joe Cook, complicated as he is, should be commended for offering such a gift.

Daron: I love all khmer dishes! I would not know where to start or how to spell it.

What advice would you give to others who want to get into the film making business?

Daron: My advice to anyone who want to get into the film business is to make completely sure that you are 100% committed to making films. Being a filmmaker is not a luxury, it’s an honor!

For more about Daron Ker: 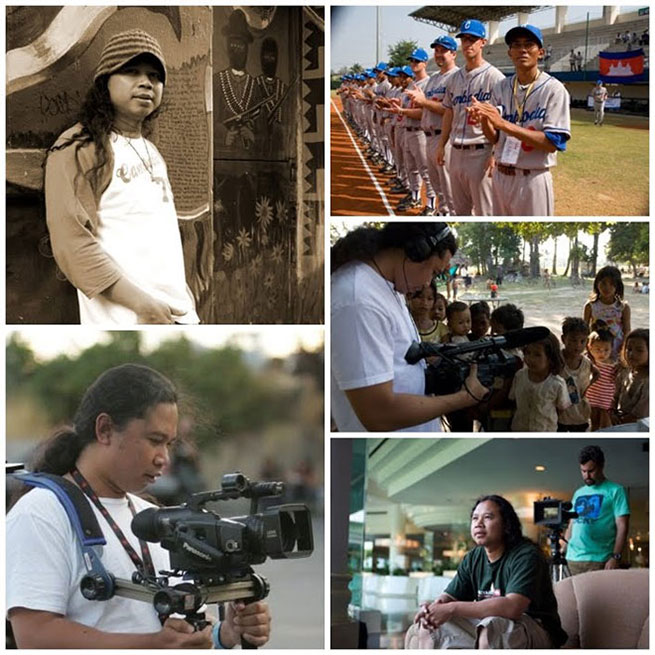 Posted on October 28, 2010 by Cambodian Alliance for the Arts in TV, Film and Theatre and tagged director, filmmaker. Bookmark the permalink.