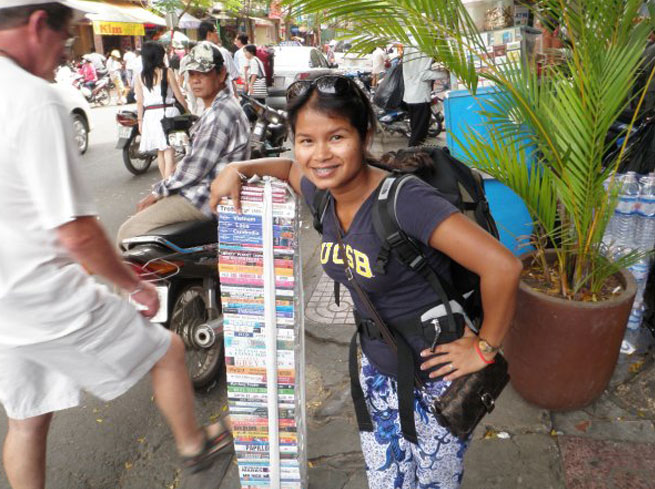 As I waited in line along the Thai-Cambodian border portal, I walked with my head high, North Face backpack on my back—you know, the one that many 20-some years old westerners carry with them while traveling in a developing country–and a United States of America passport. If you were to stereotype me, you would probably guess me as someone from the western part of the world. However, once I take out my passport it is a whole new story, and even more so when you see what is written behind the cover of my U.S. passport. Then you know that my identity has been modified to fit your foggy eyes.

Yes, so I carry a U.S. passport with me. Does that make me American? My birth place indicates that I was born in Thailand. My bloodline determines I’m full Khmer through both parents. But my father’s homeland is no longer known as Kampuchea Krom. It is now Vietnam, and although I have searched there is no where that states that the place my father and his family came from–the ethnic Khmer Krom people’s homeland now located in South Vietnam—was once called Kampuchea Krom. Nor is there anything in American’s history that talks about the Americans secretly bombing Cambodia in the 1970s. I leave what happens when your home is being bombed to your imagination.

When I was waiting for my turn to receive a stamp on my U.S. passport from Thailand along the Thai-Cambodian border portal in Poipet, a Thai officer with a big warm smile started to speak with me in Thai. He was very surprised when I only spoke English to him. He started to question me while staring at my U.S. passport under BIRTH PLACE. “Is your father Thai? Or is it your mother? Which one of your parents is Thai?” he curiously asked. With a quick response I said,” Neither.” He was still confused but stamped my U.S. passport anyway, and allowed me to go though the Thai border portal.

Posted on December 31, 2010 by Cambodian Alliance for the Arts in Guest Posts. Bookmark the permalink.