Meet Sarun Chan, Founder of Amara Magazine. With an average of 15,000 + hits for the first 2 weeks and 3000 in between issues, Philadelphia based magazine, Amara reports news and reviews about food & drink, culture, arts, music and everything else in between.

“Greetings. My name is Sarun Chan and I am the founder of Amara Magazine: Philly’s Cambodian American Magazine. I attended Pennsylvania State University where I majored in Sociology. I attended Philadelphia High School for Creative and Performing Arts where I majored in Visual Arts. I currently live in South Philadelphia, PA where I work for local community based organizations and volunteer to help make our communities a cleaner and safer environment. Some of my interests include world cultures, demographics, the arts, culinary arts, and so much more. My current obsession/favorite store at the moment is 5Below (Everything for $5 and below)! Also, I hope everyone is loving my bathroom curtain in the back ground. ” – Sarun

Sarun: I am Khmer, Chinese, and Viet. My father is 1/2 Khmer and 1/2 Viet. His mother grew up in a small Vietnamese village near the Battambang region. My Mother is 1/3 Khmer and 1/2 Chinese. Her family were raised in the Kampong Cham region. I consider myself 100% Khmer heart though because I grew up in only Khmer culture.

Where were you born and when did you come to the states?

Sarun: I was born in the refugee camp in Thailand in Chonburi, Thailand. My family moved to the United States when i was about 3 months old. I’ve lived in Philadelphia, PA my entire life.

Sarun: The small things in life inspire me. I get inspiration from other’s passions, the arts, those who have the will to smile after/presently are living in a lower standard of living. Just seeing and feeling passions to seek something better in their individual lives is amazing to me.

How did you come up with the idea of starting a Cambodian based magazine?

Sarun: It was in the winter of 2009 and I was bored to death. I hate being idle. Since leaving Penn State University in my 5th year there and coming home for break, I needed something to do to help ease the pain of boredom. Those who know me well, knows I have to do like 20 things at a time. I am always planning something or doing something. And to be completely idle… I was getting sad. So I was literally in my room in the dark (get your mind out the gutter) and fall on my bed, picked up my cell phone and text-ed a few of my closes friends and asked “Hey, wanna make a magazine?” And all I needed was the first “Sure” to get it started. I literally didn’t plan to create a magazine, I literally planned to free myself from boredom.

One of my interest is Identity. And majoring in Sociology, it help me fuel the purpose of the Magazine. I first wanted the magazine to reflect the Asian-American Identity. Then I wanted to showcase the Philly Lifestyle. I have a lot of Philly Love so I wanted to showcase the awesome art & culture, food, music, and images of the city to the rest of the world. I then came to a dilemma of wanting to specifically have it be a Cambodian-American Magazine. I wanted to give the Cambodian community in Philadelphia something to look forward to. Something to be proud of.. something they can say “Hey, that’s a photo of my block/school/street etc.” It also helped that most of Amara Magazine’s contributors are Cambodian American. We have other non-Cambodian contributors as well. But the BEST part is that ANYONE can read Amara no matter what race or ethnic background they may be.

Lastly, the reason route that I wanted to take with the Magazine was to address the identity of being “Asian-American”. Explaining what “Asian-American” is to a white American or to an Asian person from Asia is very hard. One perspective, we are forever foreigners to the American majority and the other perspective, we will be seen as Asians who lost their culture. By simply having a magazine with Asian-Americans writing about their interest, lifestyles, and passions, it simply shows how we “Asian-Americans” enjoy, do, and live. No need explaining because they can just look through the magazine and see how we lead our everyday lives. I am not speaking for everyone, but it’s a way for others who do not understand our world. They’ll get a chance to see the world through our eyes. Not every issue may have something political or have something historic, but it will have it once in a while when the interest is there by the contributors.

What’s the story behind the name of your magazine Amara?

Sarun: I literally wanted to use an Ancient Khmer name as the title of the magazine. So I decided to look up “Khmer Baby Names” on the Internet. Amara stood out because it means “deity” and it is something everyone can pronounce. Plus it sounded classy. I’m not classy or anything but Amara had an aura of “ooooh, Amara, what is that?”. It makes people ask what it means and where it came from.

When was the first issue published?

Sarun: The first issue came out on January 5, 2010. We decided to have the magazine come out Bi-Monthly because Amara is not a “Job”. The contributors and I see it as something “Fun” that we do. We all have jobs and/or go to College. If we had it monthly, we would all be rushing to produce an issue that may not have thought put into it. By having 6 issues a year, it leaves room for everyone to enjoy it and not stress about putting out an article in a rush.

What was the response from the Khmer community and the community in general?

Sarun: The response has been incredibly positive. The most feed back I get is the variety of topics that is in each issue. There is usually something for everyone. They enjoy the fact that the articles are highly relateable. I also made it a point to not be heavy on stories about Angkor Wat or ancient history. Don’t get me wrong, I have a lot of Khmer pride but I feel that we have so many other publications and promoters of our rich Ancient history. I had a few emails from individuals who asked me why I didn’t have any articles about Angkor Wat. I said that I’d leave that to the 200 facebook groups dedicated to Angkor Wat. They understood where I was coming from. The only negative response I received was that the website is hard to view on mobile phones. I failed to consider that when I created the site but it honestly isn’t my top priority. I barely know how to use my own cell phone haha!

What are your future goals for your publication?

Sarun: The goal in the future is to expand the webspace, change the web layout, and also the layout of the actual magazine page. We also plan on adding relevant advertisements so that it can help pay for the webspace and software being used to maintain it. I personally pay for everything out of my own pocket to maintain the magazine. I work 3 jobs and Amara was just something fun to do. I initially did not want to have ads because to be blunt, I thought having ads makes it look tacky or ugly. But by having ads it will begin having its own influx of funds.

For more about Sarun Chan: 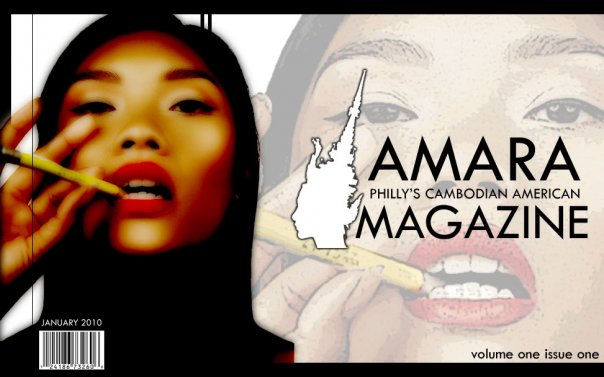 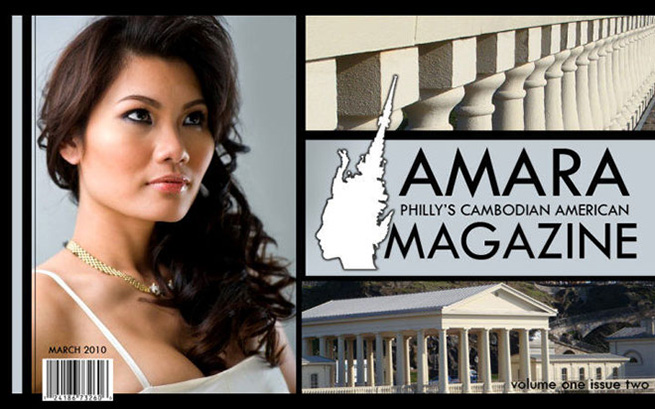 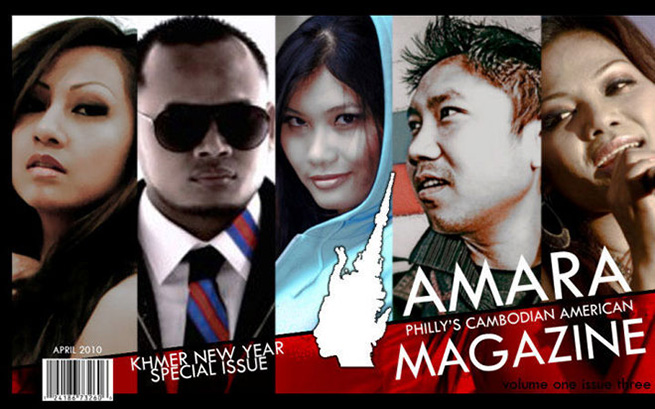 Posted on September 23, 2010 by Cambodian Alliance for the Arts in Entrepreneurs and Business Owners, Writers and Reporters and tagged philadelphia. Bookmark the permalink.