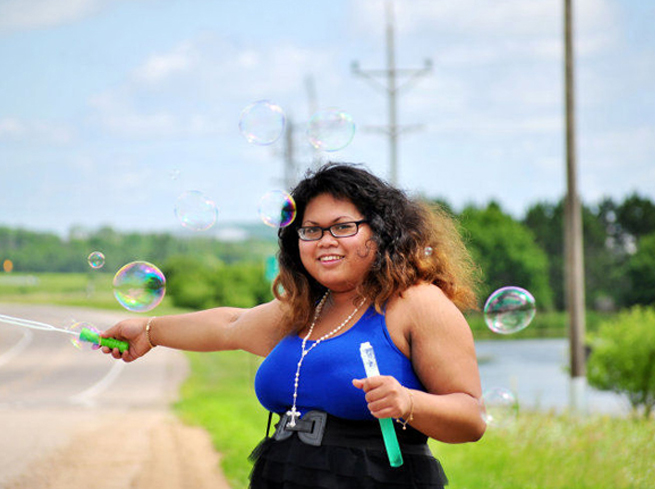 With being born in America and never having set foot in our homeland, Sophouen Chhin empathizes deeply with the struggles and torment caused by the Khmer Rouge. Her artwork is a sentiment and a tribute to her family’s past. Her inquisitiveness to learn more about her country and then capturing it through her art intrigued me enough to want to interview her.

“My name is Sophouen Chhin. I am a Cambodian-American contemporary artist and an entrepreneur. I am among the first generation of Cambodian-American born children to make it to college. I am earning my Bachelor of Fine Arts at the College of Saint Benedict and I could not be happier chasing my dreams. I love what I do and how I do it.” – Sophouen Chhin

Sophouen: I am American born. I was born in 1988 in good ole Saint Paul, Minnesota.

At what age did you know you were an artist?

Sophouen: I was always an odd one out. I think the first time I even picked up a pencil was to draw butterflies in grade school. It started when I was at one of my aunts’ house crying because the other kids wouldn’t play with me. She handed me some paper, a pencil, and a picture book full of butterflies for me to draw. I didn’t actually like art when I was young but I did it because it kept me busy. I thought art was something I couldn’t really do. I went to the College of Visual Arts as a post-secondary enrollment option during high school to explore art but I didn’t decide to even commit to art until my sophomore year in college.

Sophouen: My inspiration has a lot to do with my family and what I know of the Cambodian Genocide. My mom and grandma used to tell me so many stories growing up about my family and about how they made the great escape. I still cry to this day whenever I hear about my grandfather and how he passed away. He was utterly amazing. He was a French Foreign Legion soldier, a comedian, a Theravada Buddhist monk at one point, and a loving devoted father. He passed away during the latter half of the Khmer Rouge’s reign. He suffered a stroke and half of his body died before he did. My grandmother told me about this and how there were maggots crawling in and out of his body as he laid there dying. She didn’t cry when she told me the story the first time but it still haunts me to this day thinking about it, that was when I was about 12 or so, maybe younger. My mother told me the story again last winter and I broke down and cried so hard I couldn’t breathe. She asked, “Why are you crying? It didn’t happen to you, it happened to me and I don’t even cry about it anymore.” That shocked me. I cannot believe how strong my family is. That was when I decided my art had to be about my lost culture and my struggle in regaining my identity of being an Cambodian-American artist. None of this would be possible without Darina Siv. She was my heroine. She was the United Cambodian Associated of Minnesota’s director. She wrote, “Never Come Back,” before she passed away in 2001. She was my mom’s best friend and a powerful leader that not only showed me but proved to me that a person could overcome adversity and be greater than they ever thought possible.

What was your first accomplishment in art?

Sophouen: When I did my “Dystopic Apparitions” solo student exhibit at the College of Visual Arts earlier this year in February. 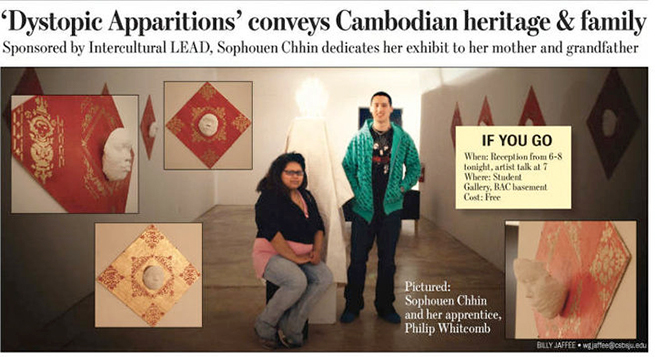 This is the synopsis of the exhibit:

From 1975 to 1979, an estimated 1.7 million Cambodians out of a population of roughly 7 million passed away under the Khmer Rouge (a communist guerrilla group that eventually controlled Cambodia officially for four long years and ethnically cleansed the country). My mom was fortunately one of the lucky ones to survive and escape. Out of eight other siblings, only three survived. She arrived in America and sought to create a better life and better home for us.

I was borne and raised here in the heartland of America in the late 80′s. Yet, I am still haunted by ideals of whether I should be Cambodian or be an American. In many ways I chose the latter, not because I wanted to, but because it was the only choice I thought I had.

Growing up, I heard so many stories. I was told of what Cambodia used to be before and during the wars. My grandfather was a favorite focal point. He was a Buddhist monk at one point, an artisan, a French Foreign Legion soldier, an opera singer, a farmer, and a loving devoted father. My other family members had various skills set similar to that of my grandfather, but from what I have heard everyone loved him so dearly. Part of this exhibit is a homage to the man he was… and for the inspiration he has given even in death.

Full of symbolism, hope, desires, dreams, this exhibit is a piece of my soul, my being, and the apparitions that silently cling on yearning for life.

What was the response from your family when they saw the “Dystopic Apparitions” exhibit?

Sophouen: They were speechless! I was worried about them actually seeing it. I actually delayed my presentation because they were late. My mom and dad were the true stars that night. It was created because of what I knew about them. Especially my mother’s side. They were so touched. My mom poked some fun at me because of some of the mask’s expressions. Overall though they appreciated what I did and accepted that I wanted to be an art major from that point on.

Sophouen: It depended on who saw it. Some people who were close to me understood immediately what it was about, who it represented, and what kind of thought I put into the exhibit. The average viewer thought it was very pretty and creepy at the same time. The fact that my face is plastered onto seven of the nine pieces was a bit unsettling. The room was also dimly lit. There was a video playing in the background of the B-52s carpet bombing areas of Cambodia and different people on film crying and talking combined with images of the aftermath of the genocide. Alongside the image of my mother and father in their wedding clothes. Everyone that saw it loved it because it was different. Whether or not they got the feeling I was trying to convey is debatable. The exhibit was successful and over 200 people saw the pieces I poured my heart into.

What is thought process that you go through before or while producing a piece of art?

Sophouen: I contemplate about what or how I want to create things and how can it be portrayed in a way that it is not seen as just “pretty art” or “art for art’s sake” kind of thing. I have to create pieces with meaning and things I feel as if I have to get off my chest. The art that I do in my personal time is art that is spoken with the heart, mind, and soul.

What medium do you use in your artwork?

Sophouen: It varies. I don’t have a set medium. I do a little painting here and there but not much. I mainly do photography. I am obsessed with gold though. I have to have gold somehow incorporated in the piece if it’s not photography. If it works I’ll sneak it in.

I see that you have a passion for photography. Do you want to pursue that as well?

Sophouen: I currently work at three different on campus jobs at the moment and two have to do with photography. One is at the school newspaper, The Record, in which you can actually see my work in the school’s newspaper archives. I do weekly photo assignments in which I learn to build my techniques in art, my social, and networking skills. I actually won an award in February for 3rd place for News photo from the Associated Collegiate Press. I was stunned. I had no clue I was even remotely good with the camera. I knew though I had a knack for it. I actually own a photo business of sorts. It’s called Adamo Photography, located in Minnesota. We are still in our start-up phase struggling to find investors, applying for grants, and ways to expand our knowledge in the field. Adamo Photography is a minority owned business and we are all very young yet but we are very passionate about what we want and chasing after our dreams.

Sophouen: I hate to admit it but I love that stinky fish! I think it’s called threay sahuy. I love it. It’s so salty and you have to eat it with a ton of rice. I have lots of favorites but that’s top and so is the one with the pig’s feet and eggs. YUM. I go home and ask my mom to make those things for me sometimes but it doesn’t always work. She says I have to learn to make them myself.

What are your future goals in art and photography?

Sophouen: I want to get my photography business off the ground and save my art for when I have time. I don’t want to ruin my passion for art with work. I am not as attached to photography as I am to physically handling materials and working on it because I like to be able to directly and physically handle my art. Photography is great but I don’t think I want to sit in front of a computer forever and try to manipulate it digitally. I want to do it and understand it. I suppose in some ways I am still a traditionalist but my art by no means is. My art is a fusion of old Khmer art with an Americanized contemporary twist. If I had it my way I would reach out into the Khmer communities and show them, you know, there’s more to life than what we originally thought. The opportunities are endless. I want my art and my photography to be an inspiration to a community that was almost destroyed. A third of our population was murdered. A lot were the intellectuals, the artisans, the musicians, and anyone that did not follow the “way”. I want to prove that even though that happened. They did not take away or even destroyed the Khmer spirit and pride.

For more about Sophouen Chhin: 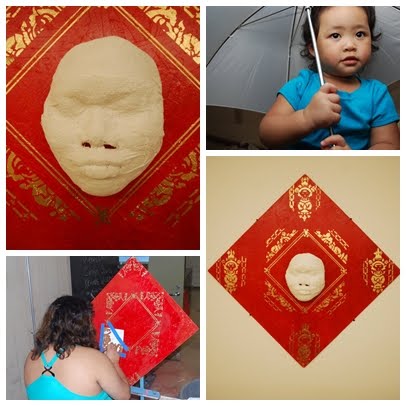 Prepping for the show and painting on the old for a piece that went into the Dystopic Apparitions exhibit. And the other image is practice shoot with my 2 year old cousin Saleena. I love photography and this one was experimenting with lighting.

Posted on September 13, 2010 by Cambodian Alliance for the Arts in Design, Photography and Fine Arts and tagged art exhibit, photography. Bookmark the permalink.