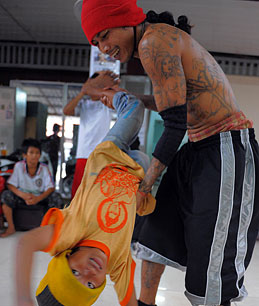 Meet Tuy Sobil also known as “KK” – the founder of Tiny Toones — an organization dedicated to the street kids of Cambodia. KK has been an inspiration to these children by allowing them refuge from their impoverished and less cultured lives. KK was a Thai refugee who’s family fled from Cambodia during the Khmer Rouge. They had the opportunity to come to the United States in 1981.

He began break dancing on the streets of Long Beach, CA and quickly made a name for his crew. The streets of Long Beach were harsh and he unfortunately he became involved with gangs. That choice cost him his freedom. He was later deported back to Cambodia, to him a foreign country and forced to adapt to the culture of his native people for the crimes he’s committed. But he didn’t let that stop him from learning from his mistakes and relinquishing a life he once lived and turning it into one of the best things that’s happened to Cambodia.

After being asked by the local kids to teach them break dancing, he turned them down several times, as he wasn’t sure if he could be the role model that they wanted him to be. But he saw how determined they were and he didn’t want them to end up on the same path as he once led. He knew he couldn’t let them down! If he had a role model growing up, I’m sure he probably wouldn’t have been in a gang Which makes organizations like these so detrimental to our youth. While he was incarcerated KK took classes to become more educated in HIV prevention, gang and drug intervention. He proves that no matter where you came from or where you’ve been, you can always reinvent yourself and start over. He is such an inspiration to others as well as the whole country of Cambodia. He’s revolutionizing Cambodia one dance move at a time.

For more about Tiny Toones:

Posted on December 21, 2010 by Cambodian Alliance for the Arts in Music, Poetry and Dance, Projects and Organizations and tagged break dancing, long beach. Bookmark the permalink.