Tom and Cris Gordon of “The Pepper Project” 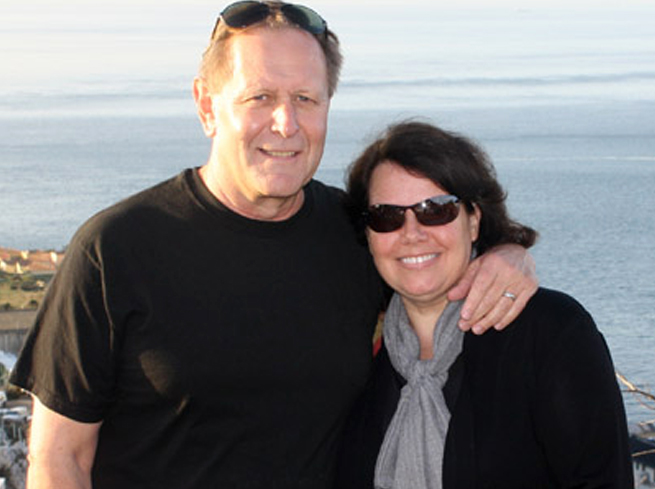 Kampot pepper is a highly regarded spice known to food connoisseurs all over and especially in Europe. The flavorful pepper is cultivated in the province of Kampot where it is the first product of Cambodia to have the status “Geographical Indication”. It is also a certified organic product.

Having a penchant for Cambodia Tom and Cris Gordon established “The Pepper Project”. When you purchase a jar of Kampot pepper from them, all the proceeds are donated to the Daughters of Cambodia. Daughters of Cambodia is an organization that helps sex trafficking victims get back on their feet by providing them social/job training and finding them work. Since starting the project Toma and Cris have sponsored two ladies from DOC. Recently the Gordons have added more fair trade products to their inventory such as spa products and handcrafted bags made by the DOC.

“My Wife Cris and I started The Pepper Project about a year ago. The goal is simple: sell Kampot Pepper in the United States and donate the proceeds to the Daughters of Cambodia. We have expanded some, added scarves from Phnom Penh and spa products from Siem Reap. We have no middleman. We try and deal directly with real people in Cambodia which has its rewards — and challenges.” – Tom

Where are you based?

Tom: Orange, Calif. Our office is in our home.

What is your involvement with the Cambodian community?

Tom: I guess most of our involvement is with people in Cambodia. As I said, we work directly with folks there. We get our Kampot pepper from Starling Farm. We get our scarves from a young lady in the Russian Market in Phonm Penh named Ramey. We get the Bodia Nature products directly from Siem Reap. And our assistant over there is Srey Neth, a waitress at the Touk Restaurant on Sisowath in Phnom Penh. Srey Neth picks up the money we wire and delivers products to the various shippers. We have a close working relationship with Cambodian-American filmmaker Daron Ker, who invited us up to Stockton, Calif. for a showing of his movie “Rice Field of Dreams.” We sold our products in the lobby of the Empire Theater there. I think we will meet up with Daron on our next trip to Cambodia in November. We have many Cambodian friends on our facebook page — both in the US and in Cambodia. We are always looking for new partnerships.

When did you establish “The Pepper Project”?

Tom: We visited a pepper farm in Kampot Province in April of last year and were impressed by the product and the people. Cris asked a farmer: What can we do to help you? The response was simple: Sell our pepper in your country. About a month later Cris was out walking the dog and was hit by car that jumped the curb. She was badly hurt and took months to recover. During that time we came up with The Pepper Project. I made a couple trips to Cambodia to contact vendors and we have been growing ever since.

When did you first learn about Kampot pepper?

Tom: On that visit to the farm last year. I guess we had probably eaten it before. We have traveled all over Southeast Asia. It’s a fantastic product, grown by 118 families. The farms and many farmers were wiped out by the Khmer Rouge. The industry is making a comeback now. It has quite a colorful history.

You are currently working on getting the pepper distributed in the United States, correct?

Tom: That’s our goal. We have shipped Kampot pepper all over the United States and we just had our first international order to Quebec, Canada. People love the product. It’s spicier than the pepper available in supermarkets. We carry black, white and red. It’s all organic and sterilized before it enters the US. We have to work out the shipping a little better, but someday we might expand into markets.

Do you just work with one pepper farm or are there others?

Tom: We work through Him Anna and Starling Farm. They produce their own pepper but also buy from other farmers. They work closely with Mr. Ngoun Lay of the Kampot Pepper Promotion Association. Starling Farm uses traditional methods but adds some modern twists to aid production. For example, most of the pepper vines grow up wooden stakes. At Starling Farm they have built brick pylons for the vines. The pylons last longer and support more vines. It’s totally organic, fertilized with cow dung and rice-field crabs. The pepper is grown in Kampot Province and they have an office in Phnom Penh. When we are in Cambodia we try and buy from many small farmers as well. Earlier this year we were among the few Westerners to attend the first-ever Kampot Pepper Festival in Kampong Tach.

Can this pepper be used in place of regular black pepper?

Tom: Oh yeah. It’s a little spicier so most people use a little less. I made enchiladas the other night and used a little too much Kampot pepper. Our throats are still burning. The black is the spiciest. Red is in the middle. White is the mildest. The red is especially pretty pepper — very unique.

Tom: Char kreng, a stir fry dish with plenty of green Kampot pepper (the green is fresh is so can’t import that). After that dish you need an Angkor Beer or two to cool down. Also the fish amok at Khmer Surin restaurant on Street 57 in Phonm Penh. If you go to www.pepperproject/recipes you’ll find many recipes that feature Kampot pepper. There are Cambodian dishes, Mexican dishes and Middle eastern dishes. The one thing they all have in common: Kampot pepper.

How did you link up with Daughters of Cambodia?

Tom: We visited their shop and café and toured their workshop in one of Phnom Penh’s brothel districts and were sold on the work they did. They have provided jobs and training for about 70 young people — about 55 young ladies and 15 young men. They teach them sewing, jewelry making, waitressing and many other skills. We currently sponsor 2 of the girls — and if the business keeps growing we hope to sponsor more.

So far, with the proceeds you have earned, you have sponsored two women at Daughters of Cambodia. What are the ladies doing now?

Tom: Yes, we sponsor two young ladies now. They are provided jobs in Phnom Penh. Sokunthea is 18 and came from an abusive home. Now she’s doing pedicures and manicures at the Daughters of Cambodia spa. She hopes to open her own business some day. Namary is 26. She worked at karaoke joints before coming to Daughters of Cambodia where she sews. The pay is around $80 a month.

Will you continue to sponsor women from Daughters of Cambodia with the proceeds?

Tom: Yes. We will continue to make donations and sell the Daughters of Cambodia products. They ship the products to us, we mark them up a little and 100 percent of the proceeds goes back to them. Daughters of Cambodia also makes the krama pouches for our pepper — which we buy at a fair-trade price. We also have another dream. We have become attached to the kids in a little village outside of Kep that harvests sea salt. We are trying to hire a teacher to visit there say once a week and teach English and hygiene. Orange County dentists have donated toothbrushes and toothpaste. We’ll work on that during our next trip. Many people have also donated medical supplies that we take to the health center in Kampong Trach. It’s a poor clinic that needs a helping hand.

What other avenues have you taken to help spread the word? How can we help?

Tom: We really don’t ask for donations. Simply, buy the products. We try to keep them affordable and be assured the money goes right into the Cambodian economy. We sell a lot over the internet and then have special events like Daron’s movie, the iSanctuary free trade sale in Laguna Beach or home parties. We have teamed up with the International Princess Project (clothing from India) and Finding Freedom (jewelry from Thailand). We go to people’s homes and it’s quite a shopping experience. There’s also a restaurant in Santa Ana that uses Kampot pepper. It’s seems like there’s something new every day. 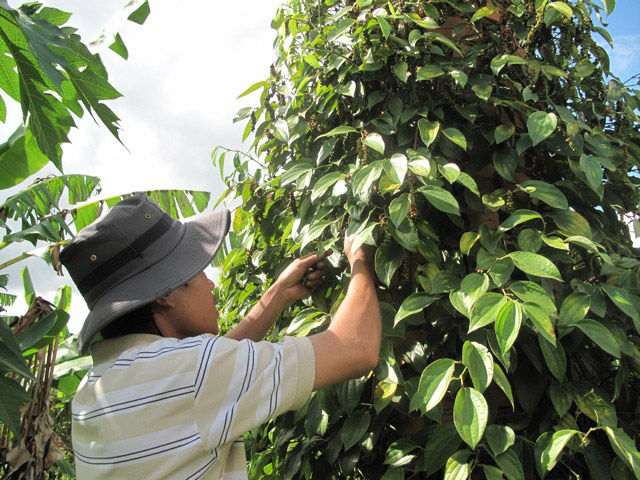 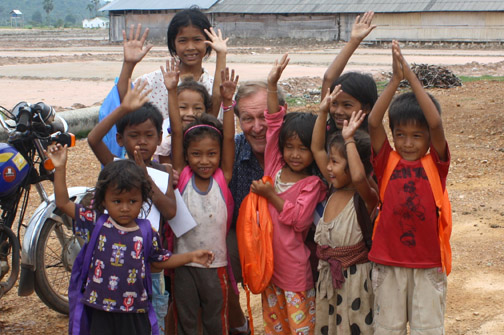 Tom Gordon in the middle of the kids from a sea-salt harvesting village south of Kep. We take them books, toys and other things on each trip. Next time we go we’ll be well stocked with toothbrushes, donated by dentists in Orange County. 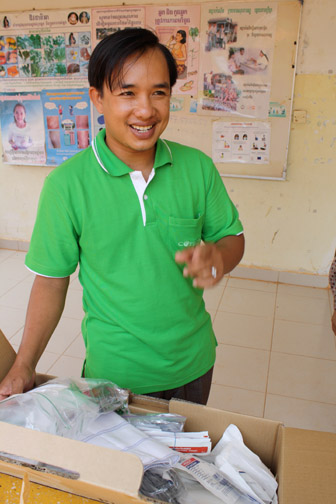 Mr. Yiv Vuthy a doctor’s assistant at the health clinic in Kampong Trach. We take them donated medical supplies 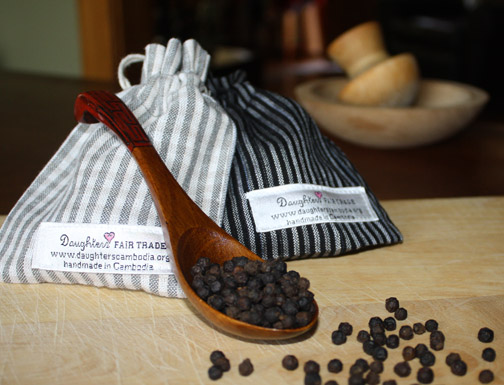 Our Kampot pepper, packaged in krama pouches made by the Daughters of Cambodia. 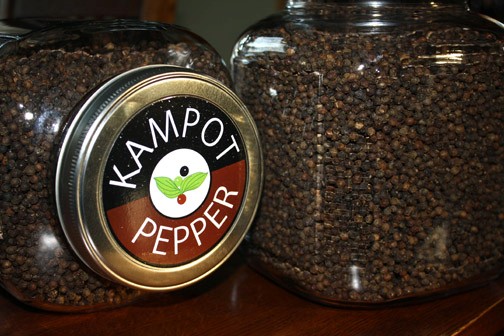 More Kampot pepper in bulk with the official logo

Ramey, she runs Stall 98 at Phnom Penh’s Russian Market and supplies us with scarves. 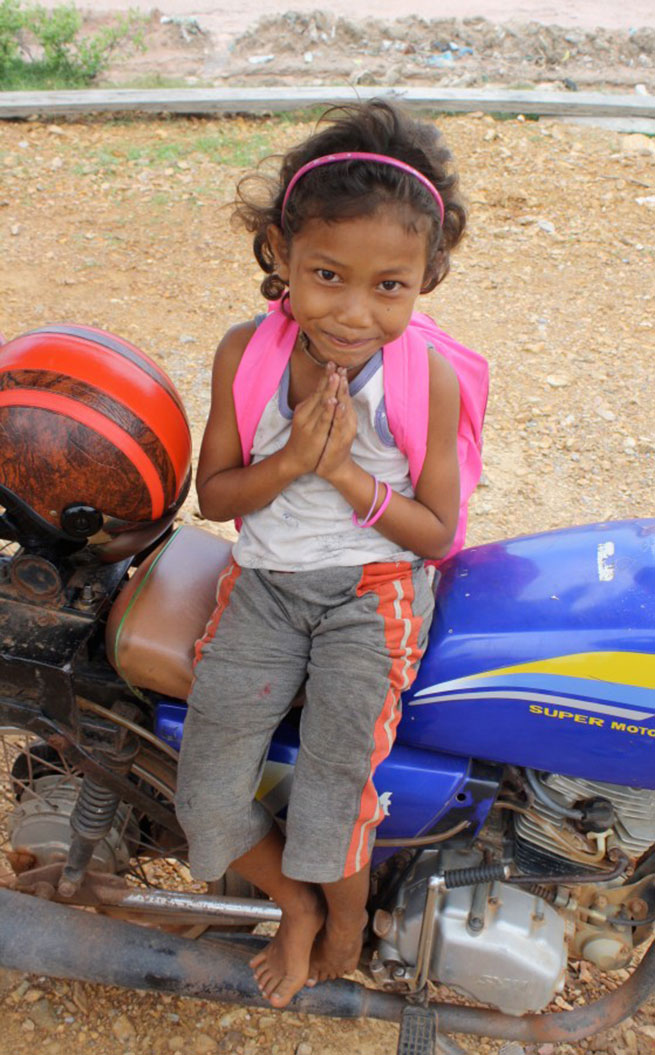 Chan Tho, my favorite in the sea-salt village near Kep (with some of the gifts we had brought)

Posted on September 21, 2011 by Cambodian Alliance for the Arts in Projects and Organizations. Bookmark the permalink.