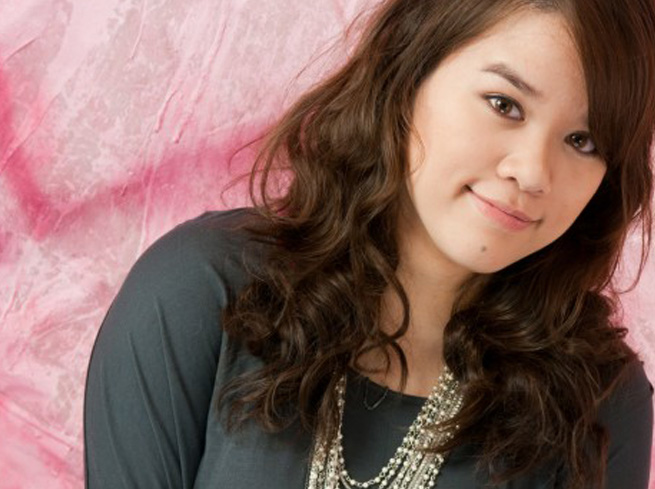 Meet Veronica Ros, composer, singer and songwriter who sings in both Khmer and in English. She has had a love for music from an early start and progressively became better at playing instruments as she got older from practice and dedication. Believe it or not, she is the only person in her family who can actually play an instrument! Veronica’s parents, however, gave her the foundation to become the talented musician she is today by supporting her quest to become a music artist. Read more about Veronica and check out her YouTube channel!

Do you remember the first time you gained interest in writing and playing music?

Veronica: I grew up in a small house with a family of eight. We didn’t have much, but we had the cool stuff: mics, keyboard, electric guitar, drum set, and amps. My father would lug around his giant camcorder over his shoulder and film music videos of us jamming to American and Khmer hits, but no one in my family knew how to play anything! That was the irony of it, but I can definitely say that those were some of the most precious memories of my childhood.

At the time, I thought that this was the norm. I thought every kid in the neighborhood had the same set up as us! And the keyboard just seemed like another toy in the house. I think because of this, I never had that “aha!” moment when it came to playing piano, but I did have an “aha!” moment for singing.

When I was in elementary school, I borrowed my cousin’s piano book because it had the lyrics to every Disney song that was ever made. I sat in my living room belting out “Circle of Life” and at that very moment, I just knew. This was it.

By middle school, I had begun taking piano lessons and composing music whenever I came across a note or chord that resonated differently from the rest of the piece I’d been practicing. But it wasn’t until high school that I started adding lyrics to my compositions.

It all started with a boy, of course. He wrote the most amazing poetry and I thought that the best way for me to get to know him better was to write too. Sadly, things didn’t work out between us, but it was through heartbreak that I discovered songwriting as an emotional outlet. That summer, I had officially written my first song called “You’re Not Here.”

That following year, I auditioned for the school talent show with this song. In all honesty, I didn’t even like it. It was boring, amateurishly simple, and almost childish. But my chorus teacher, who was on the judging panel, thought otherwise. He heard something different. I realize now that what my teacher had heard was potential. He was the first person outside of my family who really encouraged me to song-write. I’d been doing it ever since.

Reflecting back on my musical journey, I think that passion was always there, and my life had gravitated towards music without me realizing it. It’s a mysterious thing, isn’t it?

What inspires you to write the lyrics for your songs?

Veronica: In the beginning, I wrote just to fill in the blanks rather than writing with intent and purpose. My lyrics were very generic, emotionally detached, and lacked depth. I typically wrote about love and heartbreak based on my imagination or from third-party tell alls. But I began to realize that as a songwriter, you can’t just scratch the surface and create a meaningful song at the same time. You have to be able to let go of everything: the mask you wear, the shield you carry, the walls you’ve built. Opening up can be a frightening thing, but necessary. Since then, I’ve tried to explore themes I hadn’t previously touched upon, such as life, death, and existentialism. Whether it’s a cheerful song or a dark song, my lyrical inspiration comes from personal experiences or perspectives that contain a strong emotional component. If it doesn’t come from a real place, it won’t work.

Have you had formal training as a pianist or was it just something you were able to pick up easily.

Veronica: I played by ear until I began taking piano lessons in middle school. I studied lesson, theory, and technique with an instructor for seven years before studying independently. I also took guitar lessons, played the flute in the school band, and sang in school and all-county choirs!

Is your family musically talented or are you the only one who plays music?

Veronica: Both of my parents love to sing. My brother can sing and play the guitar. And I have a bunch of cousins who can do all that and so much more! But I think I’m the only songwriter in the family.

We always ask this question, What is your favorite Khmer dish?

Veronica: Salaw machu kreung. (Did I spell that right?!) It looks a little suspect at first because it looks like a hot mess of green, but it’s so delicious! I love the way my mother cooks it best.

Out of all the songs you’ve written, which is your favorite and why.

Veronica: That’s like asking me to choose which child is my favorite! But if I had to choose one, I’d have to say “Raison d’Etre,” which translates to “reason to be.” At the time, I’d been reading a French philosopher’s work on existentialism and this phrase had always stuck with me.

“Raison d’Etre” was the second song I’d ever written, and it had become the defining piece of my earlier days in songwriting, mainly because this was the song that made me decide to become a songwriter.

The lyrics were part factitious and part fiction. It was about how I relied on the wisdom of my father to guide me through life. His only wish was for me to never fall in love at a young age so that I can chase my dreams without abandon. I took this as a chance to explore what path I would choose if I had to decide between fulfilling my father’s expectations or following my heart.

I notice that you sing in Khmer and in English, which do you prefer to sing in and why.

Veronica: The first time I had ever sung in Khmer was for my song, “This Life.” I would say that I prefer to sing in English simply because I’m more fluent in it, but I think that I’d prefer to write in Khmer because it seems like a richer language with deeper and poetic meanings.

I really enjoyed that song “Fake Smile” was this written from a personal experience you had?

Veronica: In 2008, I was working on a project where I had to create three songs centering on three stages of friendship. “Fake Smile” was the third song of the set and was supposed to represent the end of a friendship. I was given the title and theme, but the rest was up to me. I never had to fit into a box that someone else drew for me, so it was difficult at first. I thought about giving up so many times because nothing I wrote worked, but I kept going at it.

I wrote about the most precious, but painful, friendship I ever had. The relationship between us was very complex and at the time, I had too much pride to admit that what she was becoming was hurting me. “Fake Smile” was meant to represent the artificial strength that we have to call upon when the people we love hurt us, because it is those that we love that can hurt us the most.

Tell me more about the lyrics behind “This Life”

Veronica: I finished composing and producing the music for “This Life” first. It sounded like a pop-rock inspirational piece, so I spent a lot of time thinking about what I wanted to write about. My inspiration came about when my father started sharing the most outrageous stories he’d read in Khmer e-newspapers. There was a lot of coverage on adolescents in Cambodia who were committing suicide over petty things. Some of the stories were so ridiculous that you couldn’t help but laugh about it, but suicide is not a funny thing at all.

In my entire life, I had never thought about killing myself. But I’ve watched someone I loved dying from attempted suicide and I’ve sung at a funeral of a friend who killed himself. It led me to think about why suicide was never an option for me, which then led me to think about whether these people would have reconsidered their actions had they had as strong of a support system as I had while growing up.

Music can be a powerful thing. It can change you, influence you, inspire you. That’s what I wanted to do with “This Life.” I wanted to create an anthem that contains a positive message. Though it is through our pain and suffering that we learn the ugliness of man, it is also through our desire to overcome and to survive that we learn just how beautiful life is. Whether metaphorical or superficial, everyone should wear their scars proudly because those scars are proof that we truly lived.

Are you 100% Cambodian? If not, what else are you mixed with.

Veronica: Both of my parents were born and raised in Cambodia. I’m about half Cambodian and half Chinese. The math always changes, depending on who’s telling the story. If there’s one thing that I’d like to do, it’s to learn more about my family history beyond my great, great grandparents.

So tell me what’s currently on your iPod, what are you jamming to.

Veronica: Only I can do something like this, but I accidentally deleted my entire music library the other day. Don’t ask me how; I still can’t believe it either! My top replays this month are tracks from 2NE1’s “To Anyone”, Big Bang’s “Tonight”, and Namie Amuro’s “Checkmate.” I like listening to monthly Top 20 charts from different countries, as well as scores and soundtracks, so there are way too many great songs to list!

Which musical artists do you look up to, who inspires you.

Veronica: Inspiration can be fleeting, so this always changes for me. The artists that have influenced me the most within the past year are 2NE1, Ayumi Hamasaki, Big Bang, Frédéric François Chopin, Lady Gaga, Paramore, and Utada Hikaru.

Where do you see your career in the next 5 years?

Veronica: In five years, I hope to become a significant influential figure in the history of Khmer music. I feel like the industry is going through a transition right now. There’s greater interest in engaging in creativity and originality rather than imitation and plagiarism. I may never become the Sinn Sisamouth of my time, but what I do now may pave the path for the next generation artist who will be. What I’m trying to do is much bigger than myself. And what I want to create is something timeless that will live on long after I’m gone.

For more about Veronica:

Posted on April 23, 2011 by Cambodian Alliance for the Arts in Music, Poetry and Dance. Bookmark the permalink.