Bones in the Dirt 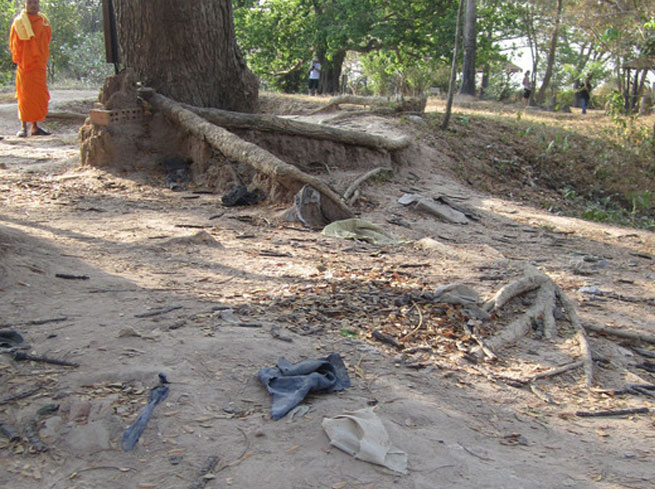 Bones In The Dirt is a collection of memoir/investigative essays exploring narratives of trauma in Cambodia. I will be moving to Phnom Penh for the research and writing of Bones In The Dirt, and am seeking funding for living expenses while I work on the project.

I became interested in effects of war trauma in the Cambodian community through growing up with the children of Khmer Rouge survivors. As a child, I witnessed the powerful ways in which wartime experiences–which were rarely discussed–continued to affect my friends’ family, through PTSD and family violence. Ultimately, the latter issue took my friends’ parents’ lives.

For many years I’d wanted to travel to Cambodia to understand what I had witnessed: to learn about the history that had never been openly discussed, and to place what I had seen into a larger context. This past spring I had that opportunity. As a Spring 2011 Glimpse Correspondent, I spent 2+ months living in Phnom Penh researching both Khmer Rouge history and its long-term effects, and published a feature piece, “Bones Surfacing in the Dirt, Thirty Years Later,” based on this experience.

I came away, however, with the overwhelming feeling that I had only begun. In my limited time, I was able to learn only a little. The main thing I learned was how much more complex, difficult and muddled the issues are, and how deeply rooted the Khmer Rouge and the effects of trauma have become in the culture. I also realized that I had my own experiences with personal trauma, which began to resurface while I was in Cambodia.

I’ve decided to move back to Phnom Penh to expand my initial Glimpse project into a book-length collection of narrative essays, both investigative and memoir, exploring the personal and societal effects of trauma. I am committing to an initial period of one year, though I suspect I’ll be out there longer.

I’ll be spending my time in Phnom Penh researching and writing. I’m an established freelance writer already working in the narrative genre. My work has appeared in 7×7, San Francisco Chronicle, Huffington Post, World Hum and Matador, and I hold a BA in Creative Writing from San Francisco State University. I also maintain a narrative travel blog, Lonely Girl Travels, which is syndicated on lonelyplanet.com. To aid my research, I will be volunteering with two local NGOs that deal with issues of domestic violence, poverty and literacy, and taking Khmer language lessons.

I will be posting regular updates about the project, my findings and experiences on my blog, so you can all follow along!

The ultimate goal of Bones In The Dirt is to give voice to the “new” generation of Cambodians, growing up in the shadow of the Khmer Rouge, and by extension, all of us who live with trauma and/or inherited trauma. The long-term, intergenerational effects of trauma have been studied among the children of Holocaust survivors but not yet, to my knowledge, among the descendants of Khmer Rouge survivors. I believe this is an important story, one that has yet to be told. I hope to be able to do it justice.

Funding will be used to cover my living expenses while researching and writing Bones In The Dirt.

Monthly living expenses in Phnom Penh will be approximately $600, including:

The remaining revenue will be generated through a combination of personal savings and income from continued freelance writing.

Other Ways To Help

Spread the word! Let folks know about my project. And if you have any contacts in Cambodia, or know of people/NGOs working on similar issues, let me know about them!

Posted on October 22, 2011 by Cambodian Alliance for the Arts in Projects and Organizations and tagged indiegogo. Bookmark the permalink.