Full Circle – An Exercise In Reconstructing 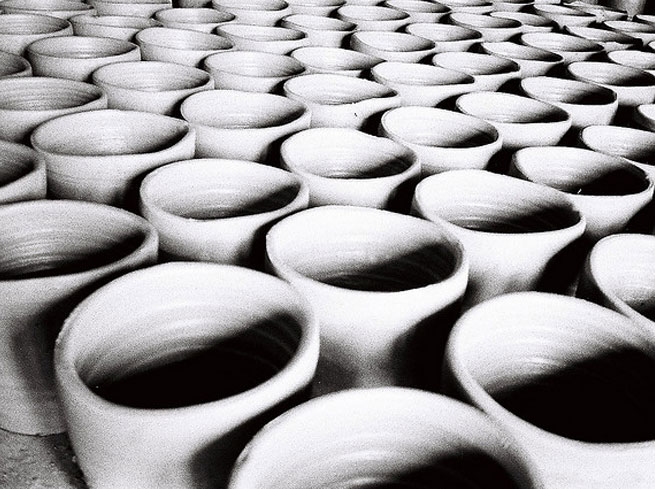 The room is gray.

The floors are gray and the cushions are gray. The walls are white, but the lighting is so dim they may as well be gray. The circular canvas sheet on which the performance is taking place is a lighter gray. The linen clothing the artist wears is dark gray.

The jars are brown.

I walk into day five of Full Circle, the durational performance of Khmerican artist Amy Lee Sanford, armed and ready. I have my camera and my notebook. I’m ready to report on the performance art piece, spanning over six days at Phnom Penh’s Meta House, in which Sanford will break and glue back together 40 Kampong Chhnang clay pots. The performance represents the shattering and rebuilding of Cambodian lives in the wake of the Khmer Rouge. It’s about loss, trauma and guilt that focuses on the literal act of rebuilding.

But as I enter into the still, gray room, I see a sign: “No Photography.” How will I write a produce a post on the show if I can’t take photos?

I sit down against the wall and take out my notebook. I’ll just write down everything I see, I decide.

The brown jars sit in a circle. Six are unbroken and 30-some have been glued together and are tied with string. There’s a break in the circle though, as two jars sit half-shattered beside Sanford.

She’s working on gluing these jars back together. She looks intently down, her hands moving with a calm efficiency as she fits the pieces.

On the canvas surrounding her, there are thousands of little shards. Some are big, and those seem to be the easiest to fit in. Some are slivers and some are little more than dust. I wonder how she fits those in. I wonder if some pieces don’t ever glue back in.

She picks one jar up, cradles it in her lap. She searches for the correct broken piece. She appears to use a system of instinctual trial and error, and I’m surprised by how often she finds the right piece, by how quickly she squeezes the glue and fits the piece in. She’s good at this, I think.

There’s two large cameras that have been clicking incessantly. One is rigged up near the ceiling for aerial shots and another is directly in front of Sanford at her cross-legged level. Every few seconds, the lenses snap and shut. They sound like insects.

There’s two other people there. One is a middle-aged Western woman, an NGO-looking type, who sits against the wall with her knees to her chest. On the opposite wall, a razor thin Cambodian man sits in the exact same posture, his boney elbows poking out like shards.

I watch Sanford’s hands as she presses the final piece back in one of the jars. She spins it around slowly, feels its smoothness. Then she turns it upside down; she ties a long white string around it. She places it, still upside down, back in the circle, beside the other glued jars.

Most of the jars she’s glued together look smooth; from where I’m sitting, I probably wouldn’t know that they’d be broken unless they had the string. But some of them I can tell—there’s a piece missing still, in a way that makes the pot look like a jack-o-lantern.

I wonder what makes those jars different, what happened to the missing piece, if it’s part of the dust that surrounds Sanford. Some of the jagged holes are towards to tops of the jars, so in theory the jar would still be useable. But some of those holes are at the bottom, so that the jar could never again hold water, no matter how smooth and complete the rest of it was.

I look at the six unbroken jars. I want to see her break one.

Just then the gallery sitter stands up. He’s wearing deck shoes and looks casual chic in a V-neck t-shirt. He adjusts the camera that was on the floors; he pulls out a tripod and clips the camera on. Then he sits back down. The camera continues clicking.

Some more people filter through—a couple of younger Cambodian men and an older monk in a maroon robe. They all stand at the back, near the door. They cross their arms behind their backs and watch.

All the while Sanford keeps gluing, smooth and steady. I wonder what she’s thinking. I wonder if she’s contemplating all the themes the piece evokes, the way in which the jars seem to symbolize not just individual Cambodian lives, but Cambodian society as well—some jars smooth and functional, so that you could never tell they’d been broken; some missing little pieces; some with pieces lost forever, in the dust around Sanford. All of them tied with string.

She clears her throat—the only sound I hear her make—and I decide she’s probably not thinking about deep and important things. Most likely, she’s thinking, “My back hurts”; “I’m hungry”; “What time is it?”

I still want to see her break a jar. That’s always the astounding thing about reconstructions, physical or psychological—how fast it is to break something and how painstakingly slow it is to clean it up. Four years to break it, I think, and over 30 to build. The metaphor works.

So I keep waiting. The room is air-conditioned and muted in grays—it feels in direct opposition to the sweaty, noisy, traffic-thronged street outside. Or maybe not “opposition”; it seems like the still moment at the center of the chaos, the full circle.

In any event, it’s an environment conducive to observation so I keep writing. It’s almost a meditative, sitting there watching. And I’m glad I can’t take pictures, that I’ve been forced to write it all instead.

I realized forty minutes have gone by. I get up to leave.

I never do see her smash a jar.

Full Circle was performed March 13-18, 2012 at Meta House
The 40 clay jars are for sale; please contact [email protected] for details.

Posted on April 9, 2012 by Cambodian Alliance for the Arts in Design, Photography and Fine Arts. Bookmark the permalink.