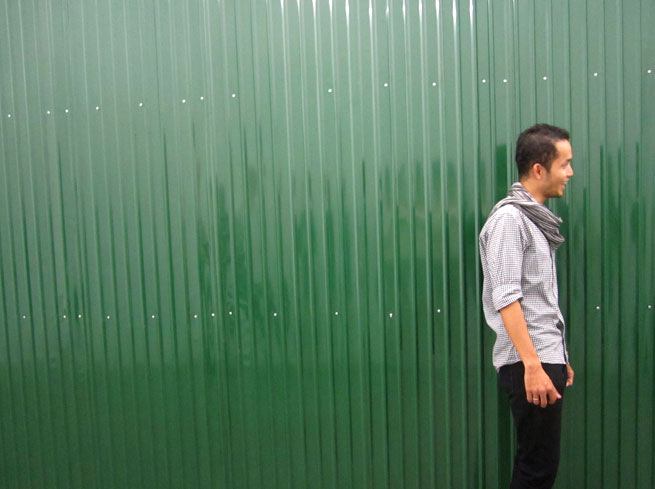 That’s what I thought when I walked in to Sa Sa Bassac last Saturday night. I was there for the opening of Wrapped Future, a solo exhibition by Phnom-Penh based artist Lim Sokchanlina.

The single installation piece that composes the exhibition is a green, corrugated tin fence, the kind you see sealing off construction sites all over Phnom Penh. The fence creates a box that juts imposingly into the gallery space, consuming the majority of the room.

It was opening night and the fence served to make the gallery feel crowded, claustrophobic even. It disrupted the normal flow of the room and left the art-goers who’d come out with only an awkward wedge of space in which to mingle.

Their dim figures reflected on the gleaming green of the fence.

I circled around a few times, examined the smooth rivets in the tin until I was convinced that, yes, it really was a big green fence.

Not a dent, not a nail out of place—a perfect barrier.

I peeked into the next room, where a single photograph of a fence hung on the wall. A thin catalog of Lim’s photographic examination of fences lay on a table. I leafed through it. The photographs were simple, composed with a kind of bold geometry that I’d never noticed out there, in the city. Photographed in their natural habitat, as it were, these fences had rust, graffiti, dirt, indentations—evidence of wear and tear, their place in the city.

I glanced back at the smooth green in the next room.

I lingered, chatted, drank tepid water from a pink plastic cup. All the while, the green fence loomed. I couldn’t escape it—I felt its presence as much as I saw it.

And I suppose that’s the point. Wrapped Future is intended as an examination of borders and barriers, both physical and psychological. Old and new; public and private; memory and the forgotten; known and unknown: all these things exist side-by-side in Phnom Penh. And they’re all divided by fences.

I pass by corrugated fences everyday here. Cambodia is rapidly developing, careening towards a brave new future, and perhaps nowhere is that more evident than in Phnom Penh, where the sights and sounds of construction are inescapable.

Fences block off those construction sites, empty lots and sites slated for demolition. Sometimes there’s holes in the fences I can peek through; sometimes there’s skeletal highrises arching up behind. But more often than not, I can’t see what’s behind the fence. Not what the sites was, what it is, or what it will become.

I’m left with only the fence.

Which I hardly ever notice, to be honest. I hear the hammering and drilling of construction all day long; my nose tingles and eyes water from the dust it blows around; I feel the busted-up pavement beneath my shoes when I walk past. Amid this sensory cacophony, I rarely notice the fences themselves.

“I am from Phnom Penh,” Lim tells me later, over soup, “and I never saw these fences until 2009. Now, I see them everyday. That’s why I’m interested.”

Redevelopment poses a lot of challenges in Cambodia. Just as I can’t escape the dirt and din of it, I can hardly go a day, it seems, without hearing about some land dispute. More often than not, residents are being removed from their land, with little or no compensation, to make way for big construction. Recent demolitions and removals in Borei Keila and Boeung Kak Lake have sparked intense protest—and even more intense repression.

Again, amid all that, I’d rarely noticed the fences themselves.

We don’t know where this is all going. Sure, we’ll get big shiny buildings, townhouses, a couple casinos perhaps. But we can’t be certain what kind of future we’re careening towards here. We’re told it’ll be a “New Phnom Penh.” But will it be better? And for whom?

The answer is, perhaps, locked behind the fence.

“But isn’t it also about the past?” a brave art-goer ventures. “I mean, the fences destroy the past too, right? You can’t see the past, or the future. Just…”

“The present,” I finish.

Lim gives us a little smile and drinks his soup.

By the end of the night though, one question is still troubling me—why is the fence in Wrapped Future so clean and perfect? Why isn’t it dented and deranged like the real ones, the ones I actually see in the city? Like the ones Lim photographs?

Lim smiles again when I ask him this. “This,” he leans in, “is an important question for me. For me, it’s all about the future. What will come? What will be built? This is why I wanted the fence to be new. So it has no past, and the person looking thinks only of the new.”

I consider this. I wonder if it’s true. I think of all the old sites torn down—the old lakeside restaurants and guesthouses, the tenement-like buildings of old slums now demolished, vanished as though they’d never existed. I think of the residents recently imprisoned for protesting; I think of their homes and their stories and their voices.

It’s not that there isn’t a past, I decide. It’s that a fence has swallowed it.

Posted on March 10, 2012 by Cambodian Alliance for the Arts in Design, Photography and Fine Arts. Bookmark the permalink.