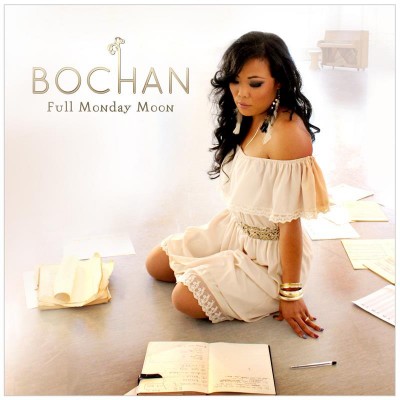 It’s said that, in the best of art, form is an extension of content. What the artist is expressing is informed by how the artist expresses it.

In this regard, Oakland-based singer Bochan’s new album Full Monday Moon is nothing short of success. The 11-track LP seeks to address and inspire contemporary, international Khmer culture. In its lyrics, genres and execution, the album achieves these goals, and then some.

“I want to be an agent of change,” Bochan told us recently when we caught up with her over coffee. “I want to break trends; I want to challenge the expectations of what a Cambodian female artist is.”

Encountering Full Monday Moon, one immediately understands: there’s no way this artist will do anything but challenge.

First, there’s her look: decidedly American, with bedazzled fingernails and an easy smile, but also darker-skinned and more solid than her willowy, pale karaoke counterparts. Then, there’s Bochan’s voice: soulful and deep, unlike the high pitches that have dominated Cambodian music for decades.

Then there’s the album’s genre—or rather, the genres. Full Monday Moon‘s tracks range from electronic to pop to urban alternative, while subject matter spans from the highly personal and the political. Sentimental love ballads intersperse beat-heavy tracks with vocals as powerful as their subject matter: everything from the struggles of male refugees to redefine their own masculinity, to the stifling expectations placed on the second-generation, to the shortcomings of inner-city US schools.

Full Monday Moon captures the Cambodian-American experience, a conglomeration of varied cultural influences. The album isn’t purely one thing, and neither is contemporary Khmer identity—it’s a heady, explosive mix that creates something new, both loyal to its influences and different from them. No track may better capture this tension than Bochan’s cover of “Chnam Oun 16″—a ground-breaking reimagining that translates a classic pre-war song into the modern-day, post-war reality. Indeed, the album’s most successful tracks, such as “Believe” and “Love Me,” are those that are born from that tension—proving again that the personal is political.

Bochan is unapologetic about this. When the video for her cover of “Chnam Oun 16″ posted recently on KI Blog, Bochan came under fire for being too untraditional—for “destroying our culture” and “sounding black.”

To this, she shrugged and gave a half-smile. “It’s like my song ‘Love Me’: ‘I can’t make them love me,’” she quoted. “In ‘Chnam Oun 16,’ I was trying to use something familiar to introduce something new, both to Cambodian and Western audiences. I want to bring Cambodian culture to a Western audience, to move us from being victims to survivors. And I also want to inspire the younger generation to create new music and art.”

It’s a tall order, but one Full Monday Moon meets.

Posted on October 13, 2011 by Cambodian Alliance for the Arts in Music, Poetry and Dance. Bookmark the permalink.