"Enemies of the People" – A film by Rob Lemkin

“Enemies of the People” is a heart wrenching and gritty documentary directed by Rob Lemkin and Co-Directed by journalist Thet Sambath. It is a story of Thet Sambath’s 10 year quest to search for answers from the perpetrators themselves of the Killing Fields. The Khmer Rouge genocide (1975-79) that killed his father, brother and over 2 million people makes his mission even more personal. After years of investigating and building relationships with Nuon Chea, Brother No. 2 and others involved, Thet is granted unprecedented access.

Noun Chea, the second chain of command next to Pol Pot testifies why so many people had to die. He recounts why were they enemies of the people. Thet also learns from the one time killers, now farmers how they were ordered to slay their community with graphic demonstrations and stories.

Enemies of the People was listed in the 2011 top 15 shortlist for an Oscar nomination. The documentary is currently screening across the globe. Visit their website for upcoming screening dates near you.

What is the synopsis of your film “Enemies of the People”?

Rob: It’s the story of a man’s 10-year quest to find the truth of the Killing Fields from the people responsible.

Tell me a little bit about yourself. I understand that you are a producer/director. What is your production company and where are you based out of?

Rob: My company is called Old Street Films. We are based in Oxford, England. My company makes films for BBC and Channel 4 and other television stations.

How did you meet journalist Thet Sambath?

Rob: Sambath was my fixer/translator in 2006 when I hired him to help me make a film about the Khmer Rouge leaders as they waited to be arrested. But then I realized he was already much further down the road. We needed each other to do our respective projects. So we joined forces and made the film together. We own the film together.

What sparked the collaboration between you two to work on this documentary?

Rob: We are both investigative journalists who like to find the truth out for ourselves. So we are like peas from the same pod even though we born at different times in very different circumstances.

You have produced a handful of documentary’s with an emphasis on Asian history and politics. How would you compare Enemies of the People to the others?

Rob: This is my first collaboration with an Asian co-filmmaker – that’s the biggest difference.

I understand that filming Enemies of the People took 10 years to complete. During that time, did you learn how to speak the Cambodian language? If so, how fluent are you?

Rob: I spent 3 making the film. Sambath was already 7 years into his project when I met him. I understand a little. And now I am starting to learn in earnest. I hope to be able to have basic conversations by the end of the year.

What keepsake from Cambodia did you take back home with you? If any, can you tell me the story behind this memoir?

Rob: My red/white karma. Since I brought it back it has become the must-have fashion accessory at my daughter’s school – she popularised it on facebook. So when he came to London Sambath brought 20 krama for the teenagers of Oxford.

Rob: It’s not my favourite, but I do quite like fried tarantula, I’m afraid.

You recently screened the documentary across some US states and universities. What was the response like from Cambodians in the younger vs the older generation? What about the response from college students and critics as a whole?

Rob: The critics have been incredibly positive. It’s 100% fresh on Rotten Tomatoes. The students have been very inspiring, as they want to take the project forward themselves in their own new ways. Younger Cambodians have been at the forefront of this amazing response. It also seems to have sparked some inter-inter-generational dialogue. I think older survivors of the killing fields have in some cases felt very angry about seeing the perpetrators so close up, but in more cases have felt they saw them (the killers) as human beings for the first time and they appreciated the film for that. We are at work on a second film and hope that response can continue to be developed.

You are currently screening across the US, Europe and was on the shortlist for a (2011) Oscar nomination. What advice can you give to aspiring filmakers?

Rob: Just be true to yourself.

For more about Enemies of the People: 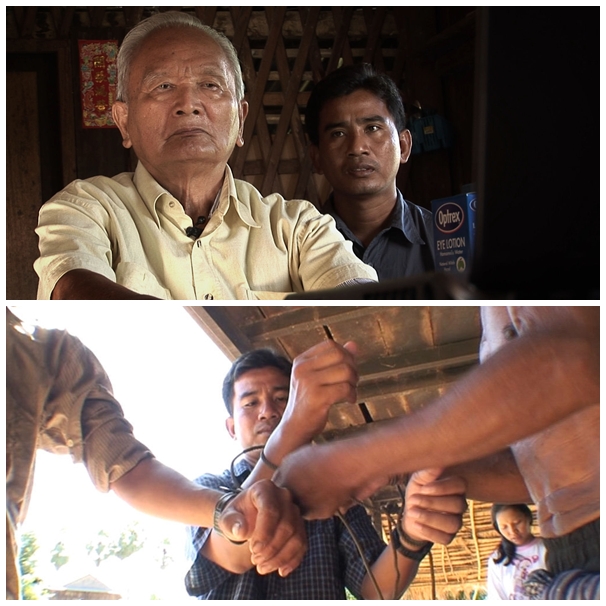 Check out the trailer below

Posted on February 4, 2011 by Cambodian Alliance for the Arts in TV, Film and Theatre and tagged documentary. Bookmark the permalink.